The dictionary which【is】bought for me by my father cost a lot of money.I have the same idea as【he has】The games【in which】the young man joined were difficult to play This is all【that】 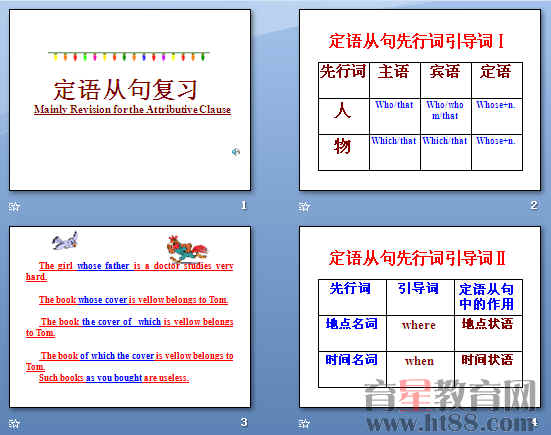 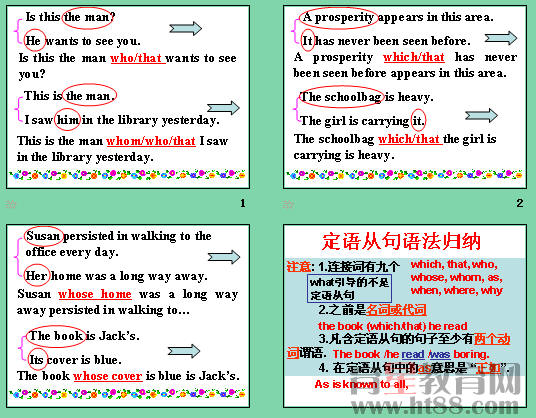 改错：She used to help my brother who was very kind of her.Do you still remember the day that we spent together in China last year?The way in which you look at problems is wrong.we were

关系代词 that which who whom whose as

The boy who got injured in the accident was sent to hospital immediately 判断以下句子是不是定语从句并选择 I advise you to cancel ___is thought unnecessary.

He remembered the weekends ____ he climbed mountains.

①当先行词为all, much, little, few, none, something, anything, everything, nothing等 不定代词时 a. All that can be done has been done. b. I am sure she has something (that) you can borrow.② 先行词被all, every, no, some, any, little, much修饰时：

I’ve read all the books (that) you gave me.

That white flower is the only one (that) I really like. This is the very book (that) I want to find.

He talked about the teachers and schools （that） he had visited.用which不用that 1.非限定性定语从句 2.在介词加关系代词中练一练：that 与 which

e.g. I recognized the boss in whose company my sister was working.介词的选用原则

1. I’ve come to the point where I can’t stand him.

不缺成分用where，缺宾语用that/which/不填1. After living in Paris for fifty

years he returned to the small

D. when2. The film brought the hours back to

in that faraway village.

for a long time.

will last for a long time.

e.g. 1. I’ll never forget the days when I spent in New

2. I’ll never forget the days which I visited

New York with you. 易错点二：固定句式出错

e.g. 1. Was it in the shop that you bought the recorder that you lost your pen?

e.g. 1. Is this library that you visited yesterday? 2. Is this the library where you visited

e.g. 1. I don’t like the way which you speak to her.易错点七：忽略that和which引导限定性定语从句的区别

e.g. 1. This is the most exciting football game which I have ever seen. （怎么改）

e.g. 1. Tell him all the things on which he should pay attention. (怎么改）

e.g. 1. The book which cover is broken is of great help to all of us.难点三.综合考查

1.This is the library_w_h_e_re_I borrowed the book.

2.It is from this library_t_h_a_t I borrowed the book.

Damiao for the first time.

Damiao for the first time.

1.This is the scientist,whose name is known all over the country2.I have many friends,same of whom are teachers.3.Guilin is a city,which has a history of 2010 years.4.The days which/that I spent together with her are really unforgettable.5.Do you know the man who/whom I spoke.6.The place which/that interested me most was the children’s palace.7.I don”t like the way that you speak to me.8.The man with whom I was travelling did n’t speak English.9.The man who you are talking is in the next hum内容来自www.egvchb.cn请勿采集。